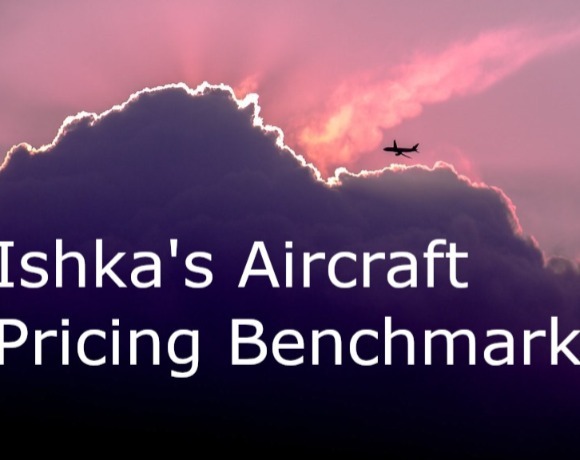 The Ishka Aircraft Pricing Benchmark aims at collecting (anonymously) the market’s view every two months. Ishka asks market makers, including buyers, sellers and financiers (including lessors, airlines, investors, aviation banks, asset managers, part-out companies, and advisors) their views on the market’s pricing and lease rates, and what they see at the low end of pricing and at the high end. Ishka simply collects and report on the prices the market sees, with no complex methodologies behind the numbers.

For this second ‘beta version’ instalment of the Ishka Aircraft Pricing Benchmark’s first round of reports, Ishka has collected and processed views on three aircraft types (the A350-900, the A330-300 and the B777-300ER) for different vintages (new, eight-year-old and 16-year-old aircraft). Where data was available, we provide a view of both encumbered and unencumbered aircraft prices and lease rates. The data shown was collected through November and December 2020.

Average monthly lease rates (MLR) for the A350-900 were tighter for encumbered aircraft than they were for expected lease rates for many of the off-lease (unencumbered) aircraft – most of which are linked to airline restructurings or cancelled orders. Average monthly MLRs for encumbered aircraft ranged from $840,000 to $1.015m and ‘high end’ observations ranged from $975,000 to $1.280m, with the average lease rates falling at $935,000 (low end) and $1.078m (high end). Contributors also shared their views that the higher MLRs are reflective of the higher aircraft specifications requested by some operators.

For unencumbered aircraft, the low end MLRs ranged from $650,000 to $945,000, while ‘high end’  MLRs ranged from $950,000 to $1.200m, with the average low and high MLRs being $815,000 and $1.075m respectively. Some contributors noted that for aircraft leased to airlines undergoing restructuring plans or renegotiating leases, this figure could even go lower, as with longer storage times being the alternative, near term MLRs are driven lower.  This is being seen despite a range of positive outlooks for the type.

Some contributors have noted that, to return an unplaced and parked A350-900 back to service, financing might be harder to obtain to cover the cost of reconfiguration, which would effectively keep the aircraft grounded. At the same time, some contributors noted that for very good credits, prices were at the same level as pre-COVID-19.

Contributors to the Ishka Aircraft Pricing Benchmark have noted that the market for the A330-300 has, like for many 1990s-generation twin-aisle types, been severely affected, currently depressed by a thin passenger market and overcapacity levels that are hardly supporting asset values.  Market participants also confirmed that while the aircraft is currently difficult to market, the aircraft has the opportunity to be used as freighter conversion feedstock, albeit at a perceived high conversion cost. Contributors to the Ishka Aircraft Pricing Benchmark stated that the A330-300's market is now a buyer's market, with market makers stating that they have little control over current market conditions and the demand profile.

For encumbered eight-year-old 777-300ER aircraft, the market has reported prices ranging from $35m to $80m, with the averages falling between $58.85m for ‘low end’ observations, and $63.6m for ‘high end’. The low end of prices for encumbered aircraft went as low as $35m and as high as $71m, while on the high-end prices went from $40 to $80m, signalling a wide spread driven mostly by creditworthiness, as contributors have told Ishka.

Some contributors have also noted that although there are offers in the market, lessors or banks are not currently keen on taking those aircraft on. One opportunity in this valuation downturn may be the aircraft passenger to freighter conversion market, as the pandemic is erasing long-haul traffic and e-commerce-driven air traffic is growing. GECAS and IAI have now launched a conversion programme for the 777-300ER, which is expected to enter service in 2022, with a second conversion programme also being developed. Although eight-year-old aircraft are not yet primed to become cargo feedstock, market observers put the price well above the eight-year-old A330-300, perhaps signalling the market’s belief that the aircraft’s potential is higher and may be kept in operation for longer.

To demonstrate the challenges faced by A330-300 market, the high-end prices observed for a 16-year-old unencumbered A320 are somewhere between $8m and $16m (as illustrated in the Ishka Aircraft Pricing Benchmark first instalment) which is coming close to the pricing seen by the market for the 2004 A330-300 vintage. According to CAPA’s Fleets database, there are currently 22 16-year-old A330-300 aircraft, six of which are inactive. Long-haul twin-aisle operations having predominantly been cut back throughout the world, with airlines taking older widebodies out from their fleets.

The 2004 vintage B777-300ER is an indicator for a significant pool of aircraft to serve the new B777-300ERSF conversion programme. At least 300 B777-300ERs are 12 years old or above, and despite a reported conversion cost approaching $35m, the current trends in cargo traffic may lead a number of these aircraft to be converted into freighters.

The twin-aisle aircraft market is currently trading at historical lows, but market observers suggest that some aircraft types have to date resisted more significant price drops.  Airbus' twin-aisle aircraft are demonstrating two different trends. While long-haul travel is still muted, the new generation A350-900 is seen by contributors as the ‘go-to’ option for future twin-aisle aircraft, where there is more confidence in financing. On the other hand, the A330-300 is seen by some as a challenged aircraft, with lower cargo conversion popularity to date and losing ground to not only the new generation twin-aisle aircraft but also to longer-range single-aisle aircraft such as the A321XLR, which will allow operators to efficiently operate thinner routes should demand remain subdued due to the pandemic and its market repercussions.  In January 2021, 78% of the A350-900 were in service while the figure for the A330-300 was 60%, illustrating how airlines are preferring to operate the newer, more efficient A350-900 rather than the oldest of A330-300s.

Contributors have told Ishka that with many twin-aisles parked and many undergoing restructurings, and with airlines pushing for short-term leases and PBHs, it is a buyer’s markets.   Despite the challenges faced by long-haul travel, the B777-300ER retains a little more popularity as an asset, being a little younger overall than the A330-300 family.  The B777-300ERSF conversion programme is expected to extend the future life of many B777s, however it is not the panacea for all B777s and observers expect further dilutions.

The Ishka Aircraft Pricing Benchmark aims at collecting (anonymously) the market’s view every two months. Ishka asks market makers, including buyers, sellers and financiers (including lessors, airlines, investors, aviation banks, asset managers, part-out companies, and advisors) their views on the market’s pricing and lease rates, and what they see at the low end of pricing and at the high end. Ishka simply collects and report on the prices the market sees, with no complex methodologies behind the numbers. These number may differ from Ishka's appraisal numbers.