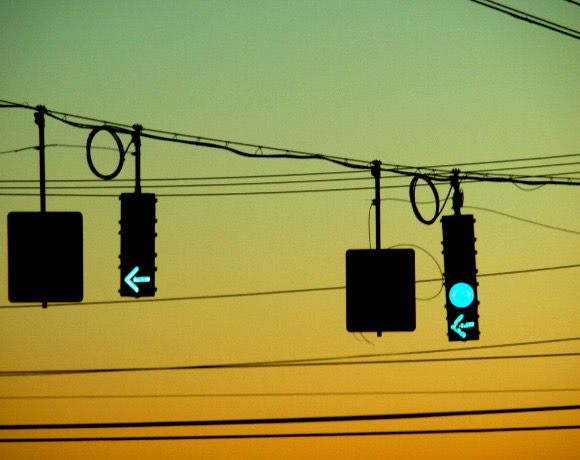 As readers would recollect, Ishka’s assessment of 2017 traffic trends was fairly optimistic (Airlines maintain capacity discipline as traffic picks up in 2017). Relative to 2016, 2017 saw a healthy improvement in traffic growth across nearly all regions. A review of the statistics for Q1 2018 suggests a continuation of that trend. Year-on-year traffic growth has continued the trend seen during 2017 accompanied by an equivalent robust performance in the capacity growth metrics which has further improved capacity utilisation. 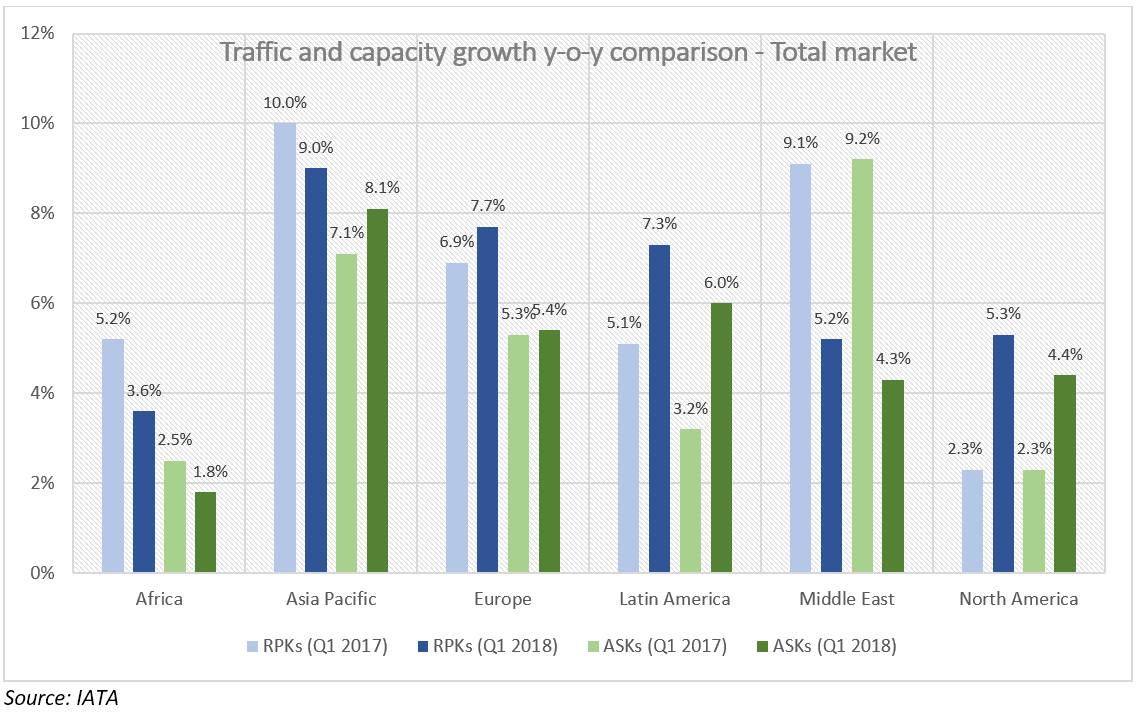 Worldwide air passenger traffic grew by 7.2% YTD March 2018 compared to 7.0% during the same period in the previous year. This was on the back of capacity growth of 6.0% in Q1 2018 vs 5.5% in Q1 2017. This has resulted in a year-on-year improvement in load factor levels. This positive uptick in load factors was evident across all major regions, although some regions did see a slowdown in the pace of traffic growth compared to the first quarter of 2017. This includes the Middle East where traffic growth has seen some softening following the various travel restrictions imposed by the US and a few other Western countries from flights originating from the region. However, as highlighted in earlier reports, the factors impacting traffic growth have now receded and there are now signs of a recovery in the region, especially compared to the lows seen during the second half of 2017.

Africa and Asia Pacific also experienced marginal reductions in the pace of growth. In contrast, North America witnessed a major acceleration in the pace of traffic and capacity growth during Q1 2018 owing to the favourable movements in the value of the US dollar and buoyant economic conditions in the US. 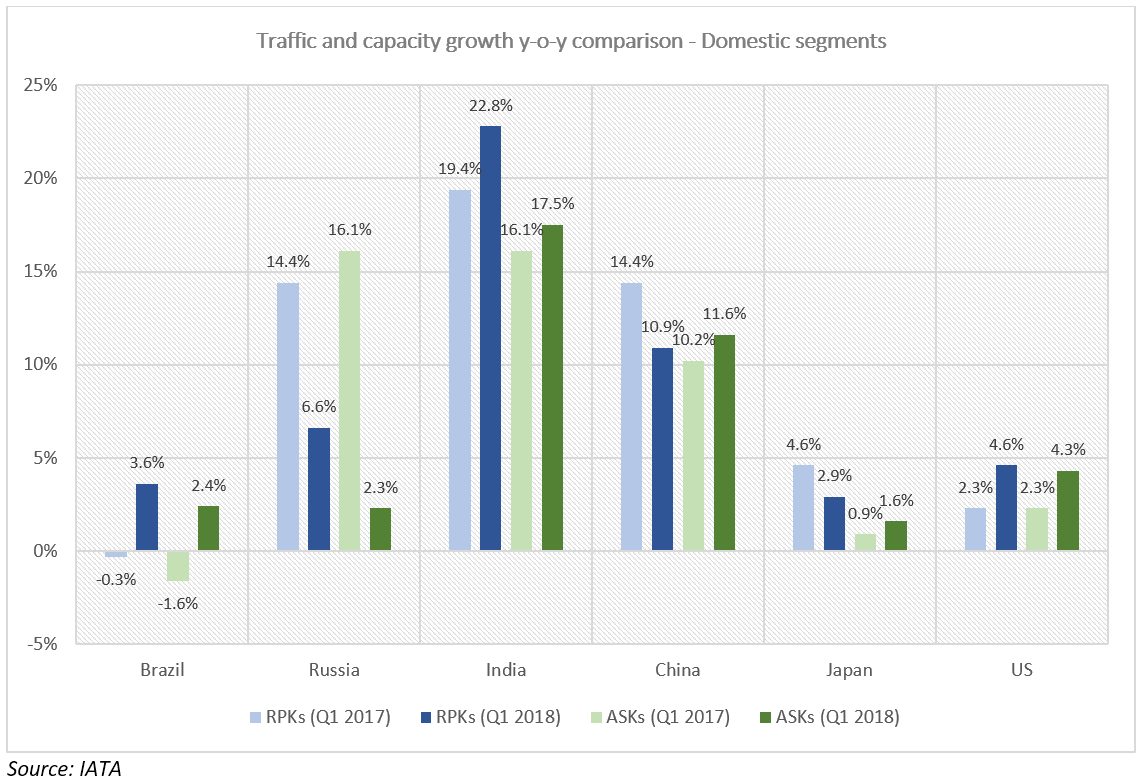 For domestic traffic, India remains the fastest growing market segment recording its 43rd consecutive month of double-digit growth. As per IATA, the country is likely to achieve a double-digit growth rate for the rest of 2018 on the back of robust macroeconomic conditions. Meanwhile in China, the pace of traffic growth slowed in Q1 2018 relative to the same period of 2017. On the contrary, the country added capacity at a slightly faster rate which resulted in a marginal deterioration in the load factors levels for the period. These appear to be just regular market fluctuations and are not indicative of any consistent long-term trend, at least as of now. The drivers for growth of air traffic in the country still remain fairly healthy. Concerns, if any, mainly stem from the trade policy frictions with the US.

Brazil and Russia’s domestic markets also continue to grow at a healthy pace following the general macro improvements. Although, the year-on-year rate of growth in Domestic Russia was slower than 2017, this was mainly due to the positive effect of a low base in 2016. The outlook for Russia remains positive on the back of expected traffic boost on account of the football world cup scheduled to held during late June-early July of 2018.

In terms of the other major domestic markets, Australia is enjoying a period of strong growth which has significantly accelerated the pace of traffic growth and very favourably in comparison to the capacity growth. Similarly, the US also experienced a rise in traffic growth thanks to the buoyant economic conditions. In contrast, domestic Japan, which enjoyed a very robust traffic growth during 2017 owing to the robust macroeconomic conditions, witnessed some softening in the pace during Q1 2018.

The key risks to traffic growth mainly emanate from the regional geopolitical risks and trade tensions between the two largest economies, China and US. Any major escalations in a trade war, or geopolitical conflicts could undermine the growth of air traffic.

Although tensions on the Korean Peninsula appear to the easing and the situation now appears more optimistic, it is still an evolving scenario. However, conditions in the Middle East appear to be going the other way and have deteriorated to some extent, particularly involving Iran. Major disturbances in the ME could affect the price of crude oil. Already, crude oil is at its highest level in three years primarily due to supply factors.

Higher fuel prices and rising labour costs are starting to put upward pressure on fares. Lower air fares have been one of the strongest demand stimulant in the past two years. Although, the benefits of rising fares on making airline financial health sustainable may outweigh the slowdown in traffic growth, if any.

The early 2018 traffic stats bode well for airlines generally, especially as load factors have also increased and follows a healthy increase in traffic recorded in 2017.  Although there were some downward adjustments in the pace of growth, this seems to be mostly in-line with the respective market conditions. Importantly, traffic growth continues to be accompanied by a prudent capacity management approach evident by the continued rise in load factors.

Nevertheless, there are still risks that could disrupt the robust traffic growth and in some cases they have even aggravated. Rising costs will put a strong upward pressure on airline fares which has been a strong demand stimulant for air traffic. Fuel prices are continuing their upward trend owing to the supply factors and escalating geopolitical tensions in some regions. On the positive side, macroeconomic conditions in the key aviation markets still remain fairly robust which, in the absence of any major exogenous shock, should continue to drive further traffic growth.
Tags:
Comments:
Share: